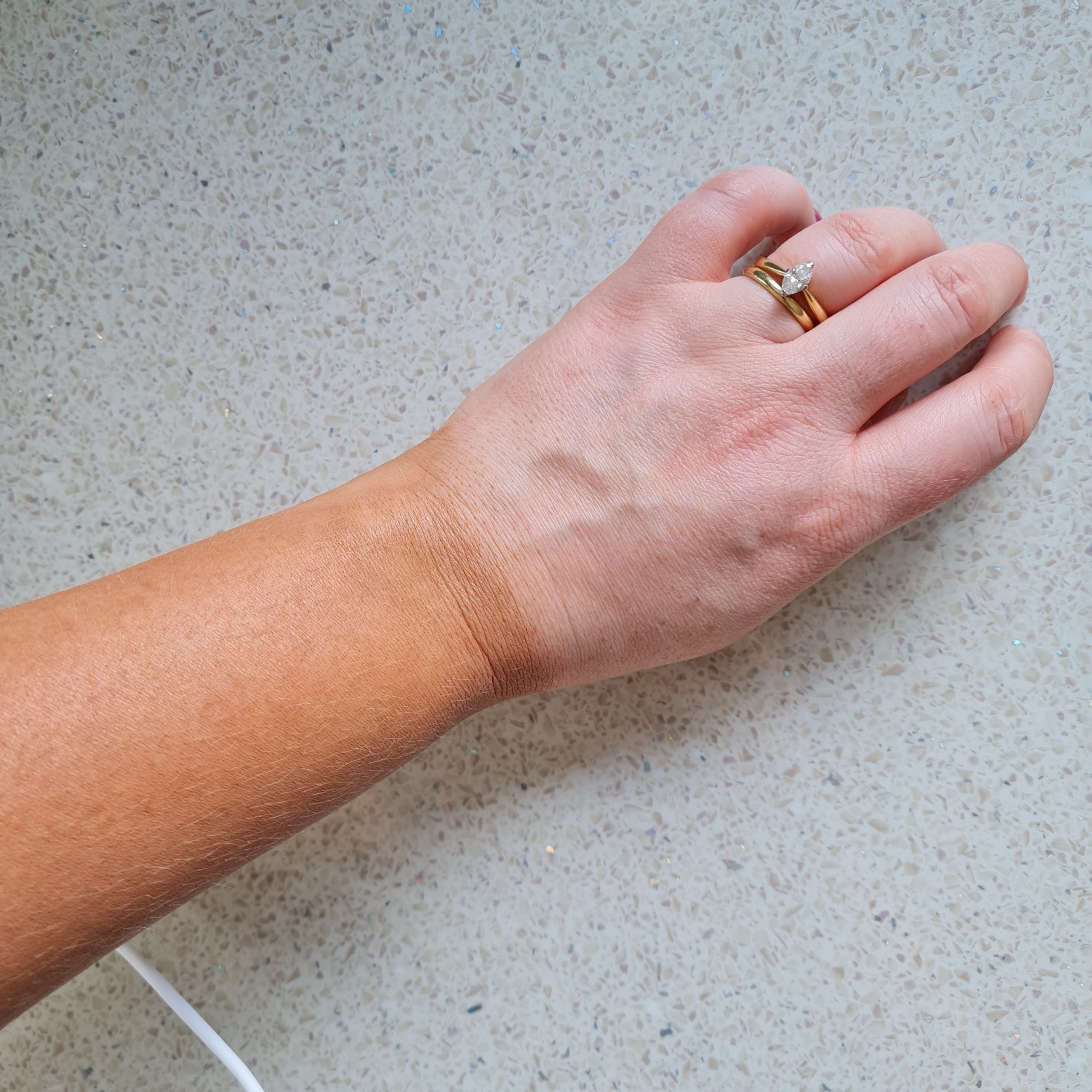 One arose from the bed on Easter Sunday morning, like a vision, resurrected from slumber and ready to rejoice in deserved chocolate joy.

‘One shall dress up’ one thought, on seeing a fablis fundraiser which required the wearing of something prettiful for a photo.

Yes, I shall put on a pretty something-or-other to snap some purty teapot shots. I’ve almost mastered those.
Or perhaps I should practice the “distance-hair-point” shot, (where one stares off to the side, pondering quantum physics, holding a lock of painfully curled-but-natural-ed hair in one’s hand and pointing one’s foot to give the impression of ever-ready for the runway…)

So, I pulled 367 fablis outfits from the wardrobe, randomly chose one (cough… the only one that zipped up and didn’t look like a camel had swallowed a penguin’s toe) and blew the dust off my favourite heels.

Yes. There is literally a layer of dust on my heeled shoe collection.

As I zipped myself into it, I caught sight of the beautiful blue colour. Then, I noticed the not quite so beautiful off-gray-blue hue of my skin against the azure tulle.

Think out of date spam. On Voldemort.
I looked rather deathly to be honest.

The realisation that in order to look less Gandalf and more J-Lo, one would have to put on copious amounts of muckup, lead to the further realisation that ‘orangu-tanned’ to the jawline and ‘gre-ige’ to the toes, simply would not work…

Nope. Once in a lifetime is grand thanks.

And so one remembered a little bottle of instant tan-stuff that had come along free (but not really free) with my good tan that had been thrown into the magic drawer of never-to-be-used-but-might-come-in-handy Shite that we all have.

‘See! I knew I’d need it!’ I told Spamalottie in the mirror, before quickly grabbing a tanning mitt and starting to lather the brown stuff onto my skin.

Imagine molasses, or treacle, mixed with manuka honey and with a glob of diahorrea from the arse of a sick cow thrown in for good measure…

Yes. I rubbed frantically and eventually got the marmalade evenly distributed on my poor, poor skin.
I looked like a leopard.
I was not comfortable with the level of radioactive that looked back at me from my mirror.

Feck it anyway. I decided to let it dry. It would OBVIOUSLY be better when it dried.

Opening the windows, I stood like a broken mannequin that had been mid ‘robot’ when time stopped and I froze my little tattas off as the layer of gloop dried.

I pulled on the beautiful blue ensemble again, slapped on some eyeshadow and lippy etc., to match the face to the rest of me and did some posing to try to get a “natural” photo.

The only natural pics were what the cool kids would call their blooper reel.

They’re always the best ones though, I think.

I decided to change into a slightly less fanciful outfit…it WAS Easter Sunday after all and I had gone to ALL this effort like?

I went back to my bathroom and washed my hands, rather satisfied with how the orange stuff had settled.

Then I dried my hands and looked down.
See photo…🥴🥴🥴

And so I stripped off, stepped in the shower, added another layer of orange to my poor tiles and rinsed myself back to the colour that Nature gave me.

Lesson learned, insta-tripe in the bin, another lighter paler slick of muckup on and notions of glamour put back in their box!

Beside the bin, where the little bottle of liquid LIES lay cast to the side…
Never to be resurrected.
And definitely deserving no chocolate.